CMC VS BMC: Latest Update on Terminology in Metrology Accreditation

Metrological traceability is disseminated to the market by Accredited Laboratories under the ILAC MRA and by National Metrology Institutes under the CIPM MRA. This provides reliability without frontiers for measurements across the world. The capabilities provided by accredited calibration laboratories have in the past been described by the Best Measurement Capability (BMC). This terminology has been widespread in accreditation around the world. The National Metrology Institutes (NMIs) have had a similar description of the services provided to their clients. Within the NMI community, the term has been Calibration and Measurement Capability (CMC). From BMC to CMC:

The BIPM and the Regional Metrology Organisations (RMOs) have in cooperation with ILAC and the Regional Accreditation Bodies (RABs) investigated the difference in terminology and have arrived at the following conclusion: “In the the context of the CIPM MRA and the ILAC Arrangement, and in relation to the CIPM-ILAC Common Statement, the following shared definition is agreed : CMC: a calibration and measurement capability available to customers under normal conditions: (a) as published in the BIPM Key Com-parison Data Base (KCDB) of the CIPM MRA; or (b) as described in the laboratory’s scope of accreditation granted by a signatory to the ILAC Arrangement. “In pursuit of harmony and co-operation between the communities; the definitions used by the two communities were already aligned. However, eventually, ILAC has decided to make a change in the terminology used and in the future the BMC will be named as the CMC. The intention is to achieve harmonisation of terminology in the dissemination of metrological traceability worldwide regardless of source. The change will be undertaken by the end of 2010 Conclusion: BMC is used widely by accredited bodies through accredited calibration laboratories which expresses the lowest uncertainty or the best of measurement that could be achieved during a calibration. CMC is used by The National Metrology Institutes (NMIs) worldwide. It describes the assessed capability achievable under real conditions every time of calibrating regardless of referring the best measurement. At this point, the NMI views that the result has no change at whenever the execution takes place. 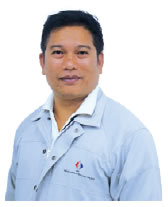 Anusorn Tonmueanwai Chief of Laboratory, Acting Chief – Dimensional Metrology section National Institute of Metrology, Ministry of Science and Technology, Thailand With over 20 years of professional experience in metrology and an invited lecturer at the Faculty of Engineering, King Mongkut’s University of Technology Thonburi