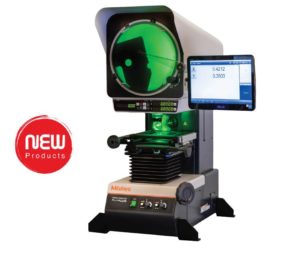 LED Illumination
The PJ-Plus implements LED illumination, a brand-new feature and design on profile projectors, replacing traditional halogen lighting. The adoption of the LED illumination source eliminates the need for a cooling fan in the main unit, drastically decreasing the entry of oil, mist, dust, etc. into the measuring instrument. LED Illumination offers many benefits as well, including: 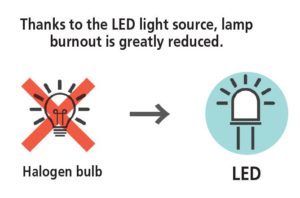 The PJ-Plus uses a much more efficient and effective stepless illumination control instead of the conventional 2-step illumination adjustment system. This allows for the level of lighting to be set precisely to suit the surface texture and color of the workpiece. These options include:

Built-in Digital XY Counter
The PJ-Plus features a built-in digital XY counter on the front of the machine. The digital counter displays XY axes and angle readings using high-intensity LEDs and a large character display for easy visibility unaffected by the environment. The operator can use the machine and view the readout directly on the projector as opposed to looking at an auxiliary DRO.

An XY axis digital counter is built into the PJ-Plus