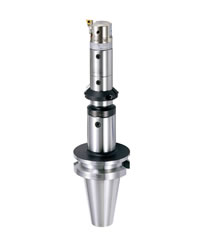 When choosing a boring head, the important factors that have an effect on the quality of a workpiece and the efficiency of work or output are accuracy, rigidity, convenience,as well as set up time. Thus, Big Daishowa has developed the CK Connection System in order to meet the demands of manufacturers.

Its first important feature is the CK Connection System, which is a mechanism for connecting the boring head that has been especially designed to be as strong as possible. It includes the CK Set Screw that has a 30 degree taper, which can pull the boring head in an axial direction. It has a special mechanism that helps to accurately locate the position of the cutting edge. The cutting edge of the boring head will remain in its previous location with a tolerance of no more than 2 µm, which is considered as a very high level of repeatability. The second important feature is that the user can easily put together the CK Connection System in many ways in order to match with the depth and diameter of the hole. The tools have a tool set that has an extension for holes that have a longer diameter than normal. It also has a reduction extension for holes with a small diameter. The third feature of the CK Connection System is that owing to the accuracy being influenced by the mechanism, the connection of the boring head provides the user with the ability to carry out presetting for just the boring head. It is not necessary to adjust other parts, meaning that a lot of time can be saved in the set up.

Other than this, the CK Connection System has a duel contact Big Plus spindle which means that the touching surfaces of the taper and surfaces of the toolholder connect tightly and firmly. This means that the tool has the maximum level of strength for high speed work or for machining hard-to-machine metals. The boring head of the CK Connection System is available in a variety of styles. The TW Boring Head has a very high level of hardness with its 3 touching points between the boring head and cartridges. The RW boring head can adjust the cutting edges for cutting a variety of workpieces and the EWN Boring Head has easy to adjust cutting blades, that provides accuracy in both the radius and axes.